Drawing with the hands

Although hand gestures are used symbolically for meditation and for narrating stories in Indian performances, in kalam images, they constitute drawing and colouring tools. The simplest gesture involves holding the powder between thumb and index and allowing it to drop smoothly onto the floor to complete dots or lines of varying thickness. Another drawing technique is to shape a funnel by folding one's fingers around the thumb. The powder stored in the palm flows vertically through a hole formed at the bottom by the curled little finger, which can be curled tightly or loosely, to create cones of various sizes. These cones can be flattened or hollowed out to become a crater, into which another coloured powder is poured in. The tri-dimensional effect of these relief ‘paintings’ is meant for the creation of crowns, ornaments, lips, nose and eyes. Both breasts of the Goddess are cone-shaped with rice grains and then covered with powders in different hues.

The Pulluvan devoted to Nâga worship draw the initial graphs of the serpent coils by smoothing the powder with the back of the hand. To obtain a three-dimensional effect on the outlines of the coils, an emptied and pierced coconut shell, filled up with powders, is tapped along the serpentine contours.

Various decorative patterns are born from shaping the fingers in different ways. In one of these, the thumb directs the powder in the centre of the middle and ring fingers pressed against each other. The powder, in effect, falls over both fingertips, which — along with the recess between the fingers — causes it to land on the ground in an open V formation, resembling a stylized bird.

For a U-shape, the powder is directed over the middle fingertip, thus forming the desired pattern. The fingertips may also be used to form slight depressions in the coloured powders, to mimic the leaves on vegetal skirts worn by certain deities.

Sometimes, the kalam painters use hollowed out coconut halves. Drilled through by one or many holes and filled up with powder, they are used like stencils to print designs, for example on the skirt of the Goddess.

To draw a perfect circle, some artists puncture the areca palm leaf sheath at required intervals, nail one end of the leaf on the ground, place powder in the sheath and rotate the sheath, using the nail as a pivot at the centre; the powder thus flows through the punctures, creating a closed ring, as it were.

I discovered Kerala’s ephemeral painting tradition through my master Mr Parameswara Kurup. It is to him, that I dedicated the film "To paint and sing the kalam" produced with the support of the CNRS (National Centre for Scientific Research), Paris. 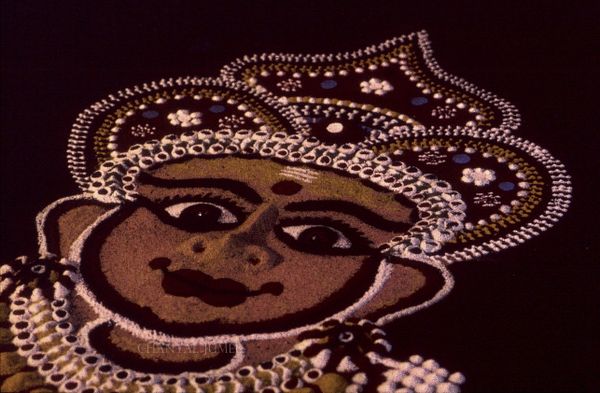 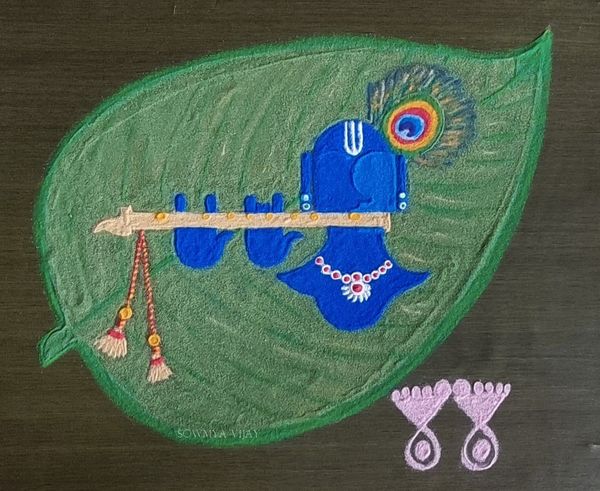 Of the various kolam created on Gokulashtami, drawing the feet of baby Krishna is a custom in Tamil-Nadu and a sign of welcoming the Divine at home. I have always been moved by the women printing with their fists dipped in wet rice flour, tiny footprints from the threshold to the altar.