Celebrating the birth of the sun

I used to live close to a river in Kerala, and every day as I walked along the path that led me to the shore, I would see a man waist-deep in the water muttering words with hands raised to the sky. Unaware of my presence and oblivious to the cries of children at play and the beating of clothes being washed on stones, he would plunge into the river a few times and reappear with cupped hands, filled with water raising them to the forehead before pouring it back into the river. Similar gestures resonated with me as I watched yoga practitioners in my school beginning their daily routines with flowing sequences (asanas) of salutation to the sun. As a Kathakali student, I was acquainted with the reverential greeting or the salutation to one or more gods, goddesses, or to one's teacher. Here at dawn, I was contemplating a man saluting the sun and it reminded me of ancient cultures that worshipped the glorious star. In societies that were primarily agricultural that depended on the sun for life and sustenance, the celestial body was deified. References are plenty: Egyptians worshipped Ra, the Greeks honoured Helios, and in Mesoamerican cultures, the sun was associated with kingship. As part of the cult of Mithra, early Persian societies celebrated the sun as the patron of loyalty to the emperor.

Many temples across India were erected to worship the Sun god and the most renowned of those shrines is at Konarak in the state of Odisha (Orissa). It has been built as a colossal chariot drawn by seven horses with twelve pairs of ornamented wheels representing the twelve months of the year.

Many temples in South India contain a shrine dedicated to the Navagrahas (nine major celestial bodies). However, the term Navagraha temples refers also to nine distinct shrines dedicated to a celestial deity. The Sun god is worshipped at Suryanar Kovil in Thanjavur district. According to Hindu beliefs, the Navagrahas are responsable for benefits and ill effects in one's life but prayers and offerings will mitigate their evil influence.

Several festivals are dedicated to Surya, the Sun god. He is celebrated during the harvest festival of Pongal in South India and by Tamils in general. Elsewhere in India it is known as Makar Sankranti or Uttarayan. During the month of Mâgha or Mâci in Tamil (mid February, mid March in South India), Ratha Saptami also known as Surya Jayanti is another celebration that includes the journey of the sun towards the northern hemisphere as well as the birth of Sun god Surya to sage Kashyapa and his wife Aditi. Ratha means chariot and the team of seven horses are the seven days of a week starting with Sunday, the day of the sun. The chariot has twelve wheels, which represents the twelve months of the Zodiac.

Surya puja starts with the drawing of a kolam or rangoli. One finds either symbolic representations of the sun as a circle, a single chariot or the traditional image of Surya riding a chariot harnessed by seven horses.

My friend Prateebha shared her experience on that day: "In general, we begin at home with a purification bath by holding several Erukkan leaves (Calotropis Gigantea) on the head while bathing and chanting Aditya Hridaya verses which are supposed to invoke the benevolence of the Lord and prevent diseases. Then I draw a chariot kolam and next to it, a divided square where I place various offerings like a pinch of salt, tur dahl, moong dahl, jaggery, and rice."

The header image has been drawn by Deepa Ramki 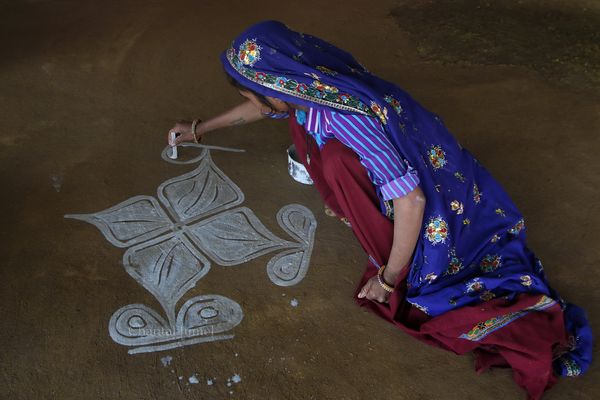